A Bitter Wind at a Shaky Time, and Iowa Is Left Reeling 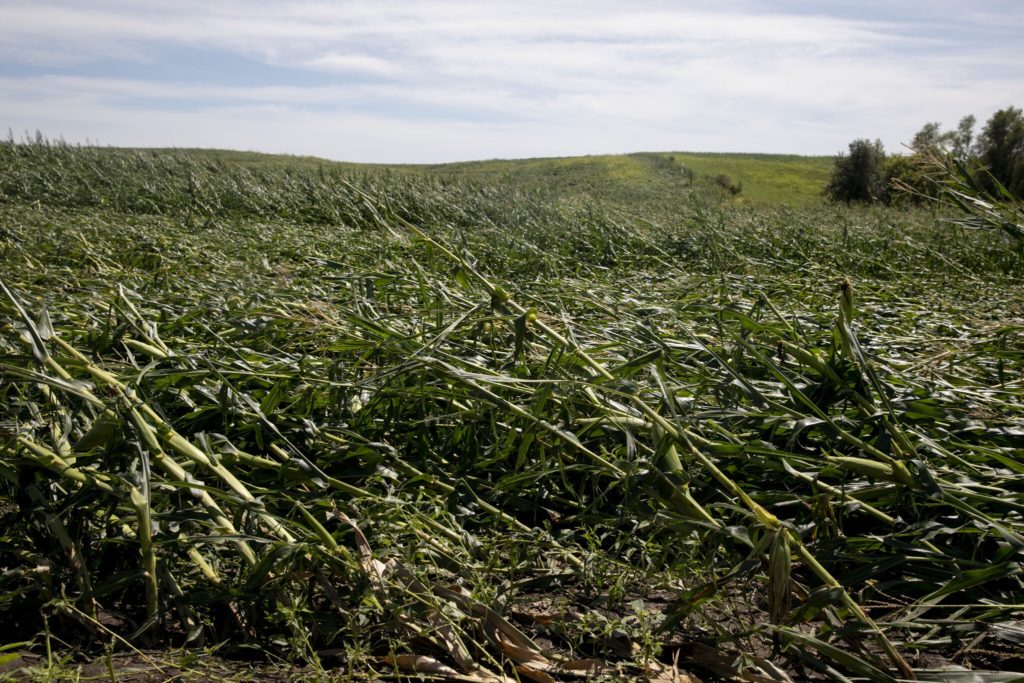 Corn plants after a storm in Tama, Iowa. State officials estimate that as many as 14 million acres of farmland — more than a third of the state’s total farmland — were damaged. Credit…Daniel Acker/Getty Images

As the winds howled outside, gusting at over 100 miles per hour, families hid in their basements and wondered what would await them when they emerged.

Many across the Corn Belt of central Iowa were stunned by what they saw: millions of acres of corn and soybean fields left toppled, tangled and torn apart; roofs torn off grain bins; buildings leveled — another daunting setback in a farming community that has had too many of them.

The damage this time was from a derecho, a line of intense and fast-moving windstorms marauding across the prairie. But it adds more pain to a series of economic challenges compounded this year by the effects of the coronavirus.

State officials estimate that as many as 14 million acres of farmland — more than a third of the state’s total farmland — were damaged, an increase from an earlier estimate of 10 million acres. Hundreds of millions of bushels of commercial storage grain bins and tens of millions of bushels of on-farm storage grain bins were likely lost to the storm.

A grain elevator at the Key Cooperative in Marshalltown, Iowa. The storm tore roofs off of grain bins.Credit…Daniel Acker/Getty Images

Brian Sampson, of Nevada, Iowa, said about 80 percent of his 1,000 acres of corn were destroyed. A building that houses cattle, called a hoop building, was ripped apart, and the roof of a grain bin and another small outbuilding were destroyed as well.

The property damage alone could cost him $350,000 — not including the reduction of his corn harvest.

The past few years have been tough ones for many farmers in Iowa and elsewhere in the Midwest.

Beginning in about 2013, a number of factors, including a leveling out of the ethanol industry, caused demand growth for corn and soy to slow down even as production increased, said Chad Hart, an economist at Iowa State University who specializes in the crop market.

That led to a decline in prices, made even more difficult by ongoing trade disputes between the Trump administration and China, one of the main foreign purchasers of American crops.

“The short story is 2019 was the year from hell and we were glad when it was over,” said Jim Greif, a corn and soybean farmer in Prairieburg, about 60 miles north of Iowa City. “Now 2020, I don’t know what you’d call it, but it’s worse than last year.”

The Buccaneer Arena in Urbandale. Iowa farmers were already under economic stress before the storm. Credit…Kelsey Kremer/The Des Moines Register, via Associated Press

Adding to the setbacks, Covid-19 pulled prices even further downward.

“Farmers have basically been treading water financially for the past three to four years,” Prof. Hart said. “That was the mix that we were in coming into this disaster.”

In Iowa, corn and soybeans are harvested in late September and early October, and this year was set to be one of the largest harvests in years.

New trade agreements between the Trump administration and Japan and China also provided some optimism at the start of 2020. But the impact from Covid-19, and now the storm, have dampened spirits.

“It’s a tough go right now,” said Mike Naig, the Iowa secretary of agriculture. “To go from what was expected to be a great yield, a great year potentially, to collecting a crop insurance payment, that’s tough.”

Rod Pierce, who grows mostly corn on 1,800 acres in Woodward, came out of his basement to a chilling scene.

Trees were uprooted. Six of his grain bins were destroyed — one had flown on top of his barn and across a road, snapped a light pole, then finally came to rest about a quarter-mile away.

The corn was devastated. Much of it is now laid flat, either broken or bent over. By Friday, the shucks were beginning to yellow.

Mr. Pierce said harvesting what corn is left will be difficult and expensive, and could cause significant damage to harvesting combine machines.

He worries the storm, combined with already-tough markets from the coronavirus, may push younger farmers to their limits.

“Our young farmers that are just getting started are just depressed,” he said. “Financially they’re going to be strapped. I wish I had an answer for the younger generation. This is really going to be devastating to them.

Mark Kenney, who grows corn and soybeans on 2,800 acres near Ames, in central Iowa, spent the week cleaning up debris. His largest grain bin was toppled over and destroyed.

Still, Mr. Kenney said he’ll fare better than many. His grain bin was fully insured, and his crop insurance will dampen some of the impact from the damage to his corn fields.

Mr. Kenney lamented the turmoil of previous years — the ongoing trade war with China and a shift away from renewable energy and the ethanol industry — and said those policy decisions and the corresponding effects on the market will make recovery from the storm even more difficult.

“From just a stress standpoint, you top these ongoing policy battles with this storm and seeing your crops flat, it’s one of those deals where it just brings you to the end of your nerves,” he said. “We didn’t need to be in this perilous position economically heading into this.”

From his farm in Vinton, Lance Lillibridge recalled the turmoil that Iowa farmers have witnessed over the past decade.

Market declines, trade disputes, more droughts and a pandemic have come in the years since.

And on Monday, fields of battered corn left him wondering: “When the hell is this going to stop?”