Bad cows break budgets: The connection between cattle behavior and your bottom line 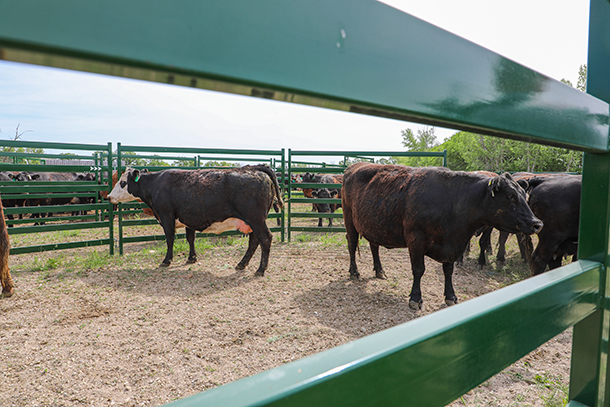 Look beyond poor temperament to see how “bad cows” affect your bottom line.

Did you know there is a direct correlation between cattle behavior and the success of your operation? The personality of your cattle can impact your bottom line in a variety of ways, ranging from processing delays caused by stubborn cattle to issues with livestock welfare and health.

Emerging research in the animal science sphere is focused on personalities of animals in domestic and zoo settings, but these findings can be applied to beef cattle operations as well.

There are five key personality factors present in all animals. These include aggressiveness, sociability, boldness, activity and exploration. These traits are similar to personality traits seen in humans in that each individual animal has a different combination of these traits, which make up their unique personality.

We are going to focus on one key aspect of cattle personality and how it can impact your bottom line. We all know that temperamental cattle can be flighty and difficult to process, while docile ones are a dream. But, the aspect that is too often forgotten is behavior and how it factors into the success or downfall of your operation. Here are the three cattle behavioral traits that can be detrimental to your bottom line and suggestions on how to fix them.

Aggression is a common issue with bulls but can be a problem with cows as well. Whether it is based on a natural tendency towards aggressive behavior in the animal or caused by mismanagement and poor handling, the result is the same. Aggressive cows will challenge everything in their path, and their behavior can lead to damage to property, or much more disastrous consequences like injury to handlers or other livestock. Common triggers of increased aggression include fear, learning and hormonal state.

How to fix it?

Cattle aggression is a problem that takes patience to improve, but the steps can be broken down easily.

1. Pay attention and pinpoint triggers for aggressive animals. Get to know the warning signs that a cow is upset.

2. Remove the stressor, if possible.

3. Move slowly and methodically when working an animal that tends to be aggressive.

Feeding vices are negative behaviors adopted by cattle and can include dropping feed and feed throwing. Typically related to the ease with which cattle in a farm setting can fulfil their nutritional needs, it can be problematic due to wasted feed – up to 5%, according to Cow Talk. This waste of feed can quickly eat at the bottom line of an operation.

There are three possible solutions to this problem:

1. Alleviate boredom by allowing cattle to graze, if possible.

2. Look for feeders that are lower to the ground.

The first thing to consider when there is a behavioral change in any animal is to check for illness. Sudden changes in behavior can often be attributed to illness or injury, and it is best to have your veterinarian come out to determine if there is a root cause for the new behavior. If an animal is still exhibiting strange behaviors after an illness has been treated, using the suggestions above can help to minimize these behaviors.