After examining the data, one parameter stood out as a key indicator of calves experiencing acidosis (low blood pH) — strength of the calf’s suckle reflex.

The importance of colostrum in a newborn calf is no secret. However, it can be a challenge for producers to know whether a calf is getting enough colostrum to receive optimal passive immunity from its dam, since range cows often calve on their own.

Passive immunity, determined by the quantity of serum gamma immunoglobulins (IgG) absorbed via intestinal enterocytes by 24 hours after birth, is commonly considered the most important factor affecting the preweaning health and survival of beef calves.

According to a study from the University of Saskatchewan, unless a beef calf acquires over 24 grams per liter (g/L) of serum IgG, the calf is at increased risk of morbidity and mortality through the preweaning period. In this study, an estimated 33% of beef calves failed to acquire this optimal level of serum IgG. The main factors affecting passive immunity include colostrum IgG concentration, volume of colostrum consumed by the calf and time from birth to colostrum consumption.

While modified APGAR scores have been used by researchers with newborn calves since the early 1970s, Homerosky notes a calf is not an infant and individual parameters of APGAR were never tested for their association with practical outcomes of interest in beef calves. Additionally, if an APGAR score is calculated, how could that information be helpful to the producer?

Rather, Homerosky aimed to develop a Beef Calf Vigor Assessment by determining calving characteristics and clinical examination parameters predictive of calves that failed to nurse on their own by four hours after birth. Identifying these compromised calves immediately after birth allows the producer ample time to provide an intervention, if needed.

Homerosky also wanted to evaluate the long-term negative impacts of failing to nurse by four hours after birth on transfer of passive immunity and treatment risk.

At 10 minutes following birth, Homerosky conducted a clinical exam, measuring respiratory rate, heart rate, temperature, mucous membrane color, strength of suckle reflex and other reflexes such as a tongue withdrawal test. She also recorded parameters such as outside temperature, age of the dam, calf presentation, etc. The calves were then kept in a maternity pen with their mother and monitored on video for four hours. If the calf had not nursed after four hours, she intervened.

At 24 hours of age, the clinical exam was repeated, and serum IgG levels were measured. Homerosky found that the beef cows in the study had very high colostrum quality and were testing on average over 150 g/L.

THE RESULTS
After examining the data, one parameter stood out as a key indicator of calves experiencing acidosis (low blood pH) — strength of the calf’s suckle reflex.

“It makes a lot of sense, from a clinical standpoint. If a calf doesn’t have a strong suckle reflex, it’s going to have trouble physically grasping a teat and consuming colostrum. However, a weak suckle reflex was highly associated with acidosis, as well as high lactate and other abnormal blood gas parameters,” Homerosky says.

“So, there’s a physiological component to suckle reflex, as acidosis often leads to poor muscle tone and weak reflexes, but also a behavioral aspect in terms of that calf’s ability to quickly learn how to nurse,” she adds.

Calves with a weak suckle reflex at 10 minutes after birth, including poor jaw tone or rhythm, were at a very high risk of failing to nurse on their own by four hours after birth. 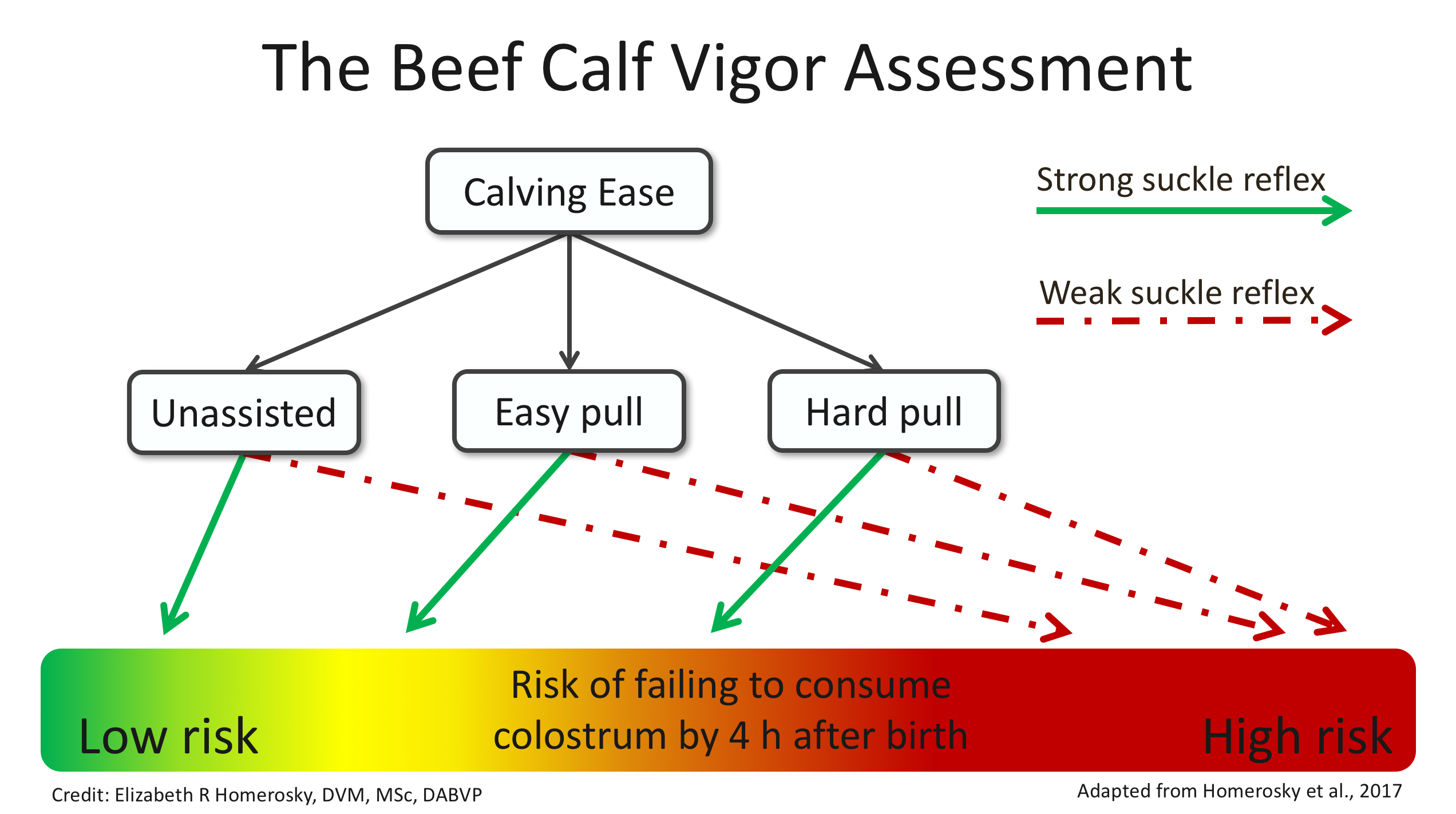 Though the suckle reflex indicator had a very high specificity (98%) in the study, Homerosky added calving ease, which had the highest sensitivity (89%) as an additional parameter to increase overall accuracy of her Beef Calf Vigor Assessment. Specifically, Homerosky found that calves with a weak suckle reflex had 41.6 times greater odds of failing to nurse on their own by four hours compared to calves with a strong suckle reflex.

“Even though every calf in the study received colostrum, those that failed to nurse on their own by four hours (following birth) were less likely to acquire optimal passive immunity and were three times more likely to be treated prior to weaning,” she adds.

To test the suckle reflex in calves, inserting two fingers into the calf’s mouth and rubbing the roof of the mouth can be a simple method to help identify issues in a low-performing, preweaning high-morbidity or mortality herd. Homerosky says the results can also help veterinarians and producers customize a plan for their operation that is practical and reduces interference with maternal-neonatal bonding in the cow-calf pair. 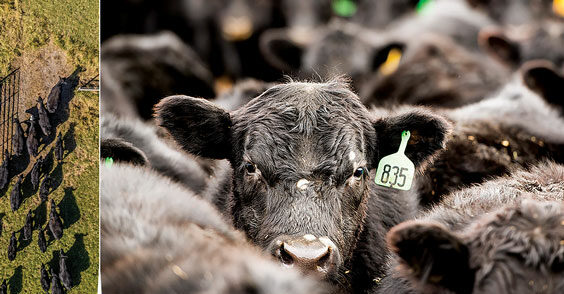 New name. Same roots. You can count on AgWest to provide the financial services you need, a dedicated staff, and the commitment to helping you grow your best future. Call our Customer Care Team at (866) 552-9172 or visit AgWestFC.com to learn more