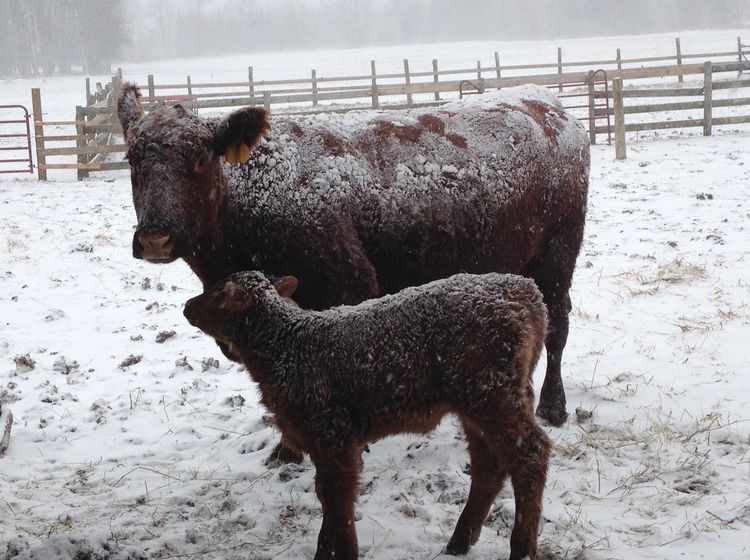 Breeding is the cornerstone of a cow-calf program. But how many producers maximize the value of their calves with a controlled breeding program? A recent NAHMS study of U.S. cow-calf producers shows room for improvement.

Breeding a beef cow herd and marketing calves are two sides of the same coin. When and how you manage the breeding season affects the weight and number of calves you have to sell at a given time. If your best marketing opportunity is a certain sale, such as a feeder calf sale, or at a certain time of the year, better prices will be received for having uniform groups of calves.

Groups of uniformly sized calves are the result of a short, defined calving season because the breeding season was short and effective. A short calving season enables a producer to concentrate his or her management efforts during calving and manage brood cows as a group with similar nutrient needs.

Many cow-calf producers plan to calve in the spring, corresponding with rapid growth of pasture forages. Brood cows turn that grazed forage into milk for their calves which creates efficient calf weight gain. In fact, according to the National Animal Health Monitoring System (NAHMS) study conducted in 2017, 56% of calves were born in the months of February through April (Figure 1).

If it is true that a seasonal approach is the most cost-effective, then it makes sense to capitalize on it by concentrating births within the season rather than spreading them out. Yet, the NAHMS study showed that less than half (46%) of beef cow-calf farms and ranches had calvings limited to three or fewer months. On the other hand, almost 28% of farms had calves born in six or more months of the year.

The 2017 NAHMS study, published in May 2020, surveyed cow-calf producers in 24 states that represent 80% of all U.S. cow-calf businesses. Farmers and ranchers in states in the east, central, and west participated, yielding data from 2013 U.S. beef cow-calf operations.

To better understand what cow-calf producers do relative to their breeding program, NAHMS investigated reproductive practices and technologies used on farms. In this, as well as in other measures, they cross referenced the size of the operation. Three sizes were defined; small: 1-49 cows, medium: 50-199 cows, and large: > 200 cows. The practices/technologies that were considered were estrus synchronization, A.I., pregnancy diagnosis by palpation, blood test, or ultrasound, pelvic measurement, body condition scoring (BCS), semen evaluation (part of a Breeding Soundness Exam) and embryo transfer (Figure 2).

The percentage of all producers surveyed who do any individual one of these practices is very low (< 20%). For example, 19.7% of producers did semen evaluation, 13.6% body condition scored cows, 11.6% used A.I. Some producers will have adopted more than one of these practices, but only 38% of all producers (all regions, all sizes) did any of the listed practices. Yet, most of the practices/technologies can be done by the producer him or herself when trained. Estrus synchronization, A.I., blood draw for pregnancy diagnosis, body condition scoring, and pelvic measurement do not require a veterinarian and can be done routinely on-farm.

Large cow-calf producers (> 200 cows) were more likely to adopt these practices, resulting in more than half of them doing palpation and semen evaluation and 78% doing at least one of the practices.

Better marketing with improved prices is dependent on increasing the management of breeding. Soon the spring calving season will be upon us. Take stock of what is going on in your herd. Use the record of calvings as your baseline to improve upon. Plan now how you can tighten the breeding season, getting as many cows and heifers bred as early in the season as possible.

A breeding soundness exam (BSE) is an important component in natural service herds. Having the bull capacity to cover the herd within a few weeks is better than having to depend on months to get some animals bred. Synchronizing cattle for estrus can be used to improve breeding season efficiency whether breeding is natural or by A.I.

When vaccinating or handling cattle in the summer, consider drawing a blood sample for pregnancy diagnosis or having a veterinarian palpate the dam. Diagnosing pregnancy early (any time after 30 days serviced for the blood test), enables you to make better decisions about what to do with that cow or heifer.

These are starting areas for improving your breeding program; for taking control of it. When you take control of breeding, you are making a conscious effort to produce better calves and receive better prices.