Don’t forget the bulls this winter 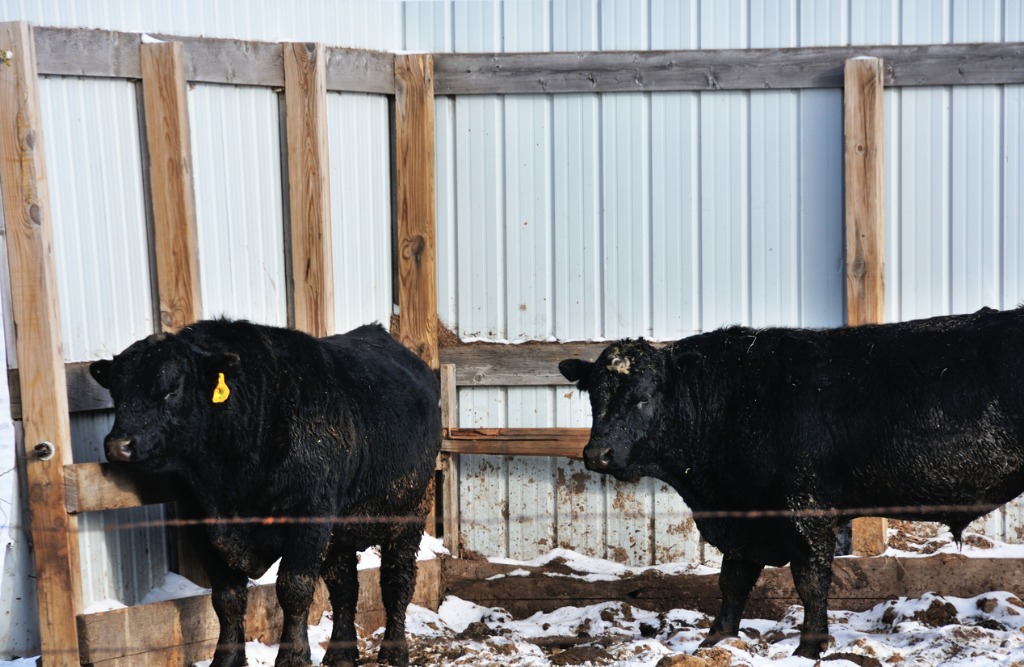 In a December Beefwatch webinar series, Kacie McCarthy, cow-calf specialist at the University of Nebraska – Lincoln, reminded listeners of the variation of bull workload during the breeding season. She explained that bulls cover anywhere from four to 80 females per bull, and some bulls are going to do a lot more of the work.

“Coming off the breeding season, what we see is a weight loss of 100 to 400 pounds,” McCarthy said. “We are losing one to two body conditions, depending on the age and maturity of those bulls. The ones we need to be most concerned about are our younger bulls that are still growing.”

In order to get those bulls back into condition for the subsequent breeding season, McCarthy suggested separating younger or thinner bulls from the more mature, dominant bulls. In doing so, producers can better manage and feed those younger bulls to roughly 65% to 75% of their mature size going into the next breeding season.

“If we can separate them early after the breeding season, we can get a one-and-a-half to two pounds per day gain on those younger bulls,” she said.

Most of the mature bulls are going to be in good condition coming off the breeding season and can be maintained on a 100% forage diet. Generally, McCarthy said, if they get roughly 7% crude protein and 50% total digestible nutrients (TDN) they can maintain their bodyweight, but she recommends visually looking at their condition to make sure they are maintaining their bodyweight and not losing condition through the winter.

Also, a good mineral program is great for growth and reproductive performance. McCarthy said selenium is critical for normal spermatogenesis, and zinc plays a critical role in male fertility, impacting the motility and morphology that helps sperm move through the tract and get to the egg. Another mineral that is important is iodine, which has been shown to alleviate foot rot.

Looking at Table 1, McCarthy pointed out the differing nutritional requirements for different weight classes of bulls. Based on the chart, McCarthy noted that a younger, 1,400-pound bull with a target average daily gain of two pounds per day would need to consume about 28 pounds of dry matter intake a day and about 8% crude protein. Depending on the quality of forage, she suggested supplementing about three to six pounds of grain (corn or distiller’s grain) to help meet those protein requirements.

“We have roughly 120 days through winter until that next breeding season where we can put weight on those bulls,” McCarthy said. “So, this will be really critical, especially for those yearling bulls, to make sure that we get them around that body condition score 6 and targeting that 65 to 75 percent mature bodyweight because these bulls are still growing, and we want to make sure we are meeting their requirements.”

McCarthy also pointed out that cold weather, especially wind chill, can have a major impact on fertility. Damages from frostbite will appear as a discoloration, scab or sloughing of the lower scrotal portion. She said if there is an insult during winter, the spermatogenesis cycle takes upwards of 61 days, so the quality of the sperm within that cycle will be impacted and will need to be reevaluated with a breeding soundness exam (BSE).

To minimize the risk of frostbite as well as body energy loss, McCarthy recommended bulls have plenty of room to move and be active, have some type of shelter or windbreak, and be provided bedding to help protect them from the frozen ground.

Referencing some research looking at the effects of severity of frostbite on semen quality in bulls, McCarthy noted the percentage of bulls that had unsatisfactory BSE scores increased to 26.7% when frostbite was moderate. Likewise, with severe frostbite injury, 88.7% of bulls scored unsatisfactory, with only 2.1% scoring satisfactory and 9.2% scoring questionable.

“It’s important to remember that a breeding soundness exam is a snapshot in time,” she said. “So, what happened 60 days ago is usually going to be representative of that snapshot in time that we are seeing, in terms of that semen quality and maybe that potential for unsatisfactory soundness exam. If we can manage and give our bulls enough time to cover and retest, we can usually get past that insult and then allow that semen quality to improve prior to turnout.”

The USDA National Animal Health Monitoring System (NAHMS) survey indicated that 57% of operations that purchase bulls had a BSE conducted on newly introduced bulls. Only 17% of cow-calf operations had a BSE done on bulls that were already on their operation.

McCarthy recommended conducting a BSE four to six weeks prior to turnout. This will allow producers enough time to purchase replacement bulls if animals don’t pass. In addition to the breeding exam, McCarthy said winter is a good time to get other evaluations done, such as vaccinating for reproductive diseases, controlling lice and flies, and checking feet and legs.

Introducing bulls to their breeding groups early is also recommended so they have already established social dominance and will go out and breed females come breeding season.

The webinar can be viewed at this link.

Photo: Bulls should have access to some form of shelter or windbreak to help minimize the risk of frostbite.