How do I get a ‘good’ price for my calves? 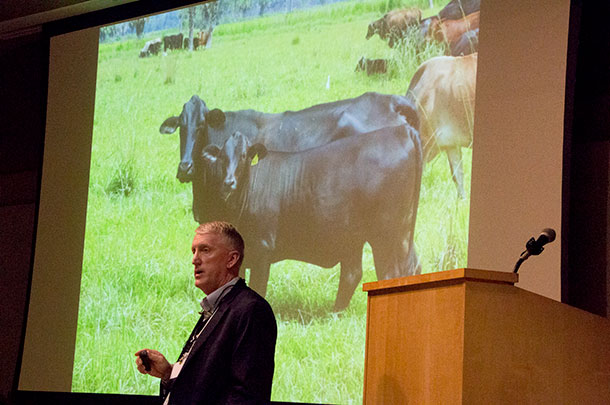 Rick Machen from the King Ranch Institute addressed a full house at the Texas A&M Beef Cattle Short Course when he spoke to attendees about marketing commercial calves. The overarching question he addressed throughout the presentation was “What is a ‘good’ price for my calves and how do I get it?”

He first emphasized the need for marketing instead of selling calves. “Selling in Webster’s Dictionary is defined as ‘to give or hand over in exchange for money,’ as opposed to marketing, which is defined as ‘exploring, creating and delivering value to satisfy the needs of a target market,’” he said.

Machen said an important difference between producers who sell their calves and those who market them is the level of communication they have with the people who are selling their cattle. “You are doing yourself a disservice not to communicate with whoever it is you are depending on to market your cattle,” he said. “They would love to have a relationship with you where they know you, they know your program and they know your cattle. In the absence of that, they can’t sell your cattle as well as they’re capable of if they don’t know what they’re dealing with.”

Sell when the time is right

Simply keeping an eye on the markets and deciding “the market is good this week; I guess I’ll load up and take them in next week” is a poor strategy. “When you’re selling your calves, the market will never be the same week-to-week, but when you’re marketing your calves, you’ve got a plan, you’re communicating with whoever it is you are relying on to market your cattle, you study your options and you go when the time is right for you,” Machen said.

When it comes to marketing calves, it is important to finish strong. A cow-calf producer puts a lot of time and effort into producing a calf and getting it through to weaning. “If we worked as hard at marketing as we did at producing that commodity, I think there’s opportunity for the bottom line to be a little bit different,” he said. “If we work hard at marketing, I think there is always opportunity for extra value.”

Regardless of the size of an operation, a “good” price for calves will always be higher than the input cost. “If you do not know your cost of production, you cannot know what is a good price,” Machen said.

Everyone has heard a conversation at the feed store or the coffee shop where someone says, “My calves averaged $900.” Chances are low that a similar conversation has ever taken place where a person’s bragging rights were “My cost of production was 1 dollar and 23 cents.” “Why don’t we talk about cost of production like we talk about market prices?” Machen asked. “Because we don’t know, because it’s difficult to calculate. The check you get from the sale barn tells you exactly how much your cattle brought. That number is easy to get and we’re proud of that, but tallying cost of production takes a lot of effort to get all those numbers together.”

Machen divides expenses into two camps. Variable expenses include replacements, grazing costs, labor, purchased feed, fuel and reproduction costs (both bull and A.I.). These costs vary year-to-year or month-to-month, depending on the needs of your herd. Fixed costs include land payment, property taxes, owner salary, vehicles, equipment, maintenance on infrastructure like water sources, roads and fences, and depreciation, something even harder to calculate than cost of production.

Machen said that on average, 63% of ranch expenses are fixed, and 37% are variables, although those numbers vary by operation. According to CattleFax, the average cost of production for a cow hovers around $600 – not including depreciation or operator labor. Including those, it comes closer to $900, with the biggest expenses attributed to labor, purchased feed and depreciation.

Even though the cost of production can be daunting, maintaining profitability can be achieved by optimizing – not maximizing – productivity, lowering the cost of production by trimming variable costs where possible, concentrating on producing a preferred product that will bring the most value and marketing that product as best you can. “As a beef producer, you do not control the weekly average price, but you do control on which side of the average your cattle sell,” he said.

He closed his presentation by quoting CattleFax CEO Randy Blach: “You can’t get ahead doing nothing at all.”

PHOTO: Without knowing your cost of production, you cannot determine what price is “good” for you. Photo by Carrie Veselka.