How to meet winter water challenges 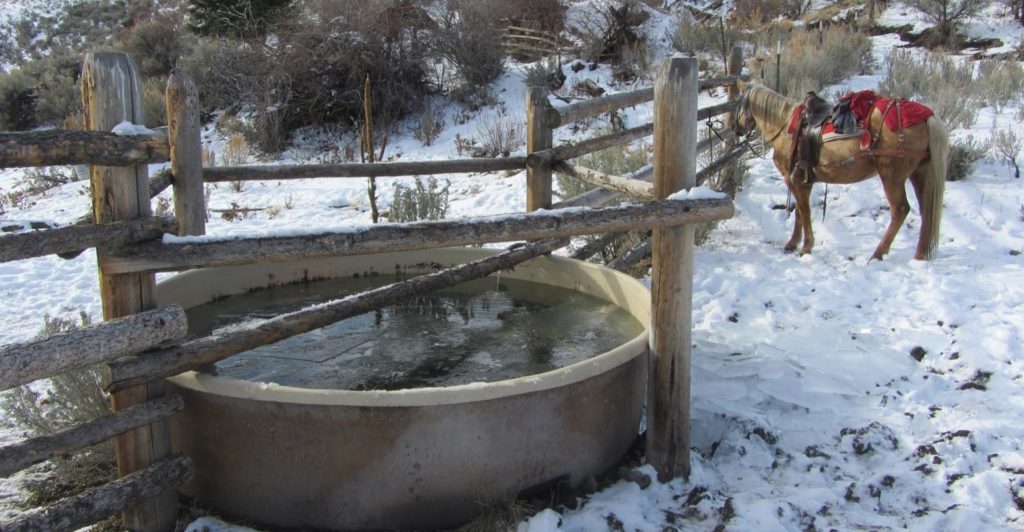 This round, insulated water tank that has a large flow of spring water piped into it. An overflow takes water some distance away underground so when it freezes it doesn’t create an ice buildup around the tank.

Here is a list of ideas to help solve the livestock water puzzle in cold climates.

In cold climates, keeping livestock water ice-free can be frustrating but doable.

Karl Hoppe, extension livestock specialist for North Dakota State University, says the easiest way to keep water warm enough is with an electric heating element, but that isn’t the complete answer. Many systems fail during extremely cold or prolonged cold weather, he says.

“Not only does it freeze the tank, but also the standpipe. Even if you apply heat to that pipe it will take a while to thaw. Some people use steam or hot air, like exhaust from a pickup or tractor,” Hoppe says.

Options for heating a waterer include natural gas if you don’t have access to electricity. Some people use a propane heater.

“When I was growing up, we used a propane burner with a thermocouple so that when it got cold, it kicked on,” Hoppe says. “Some people use coal furnaces or cob boxes (burning corn cobs) for heating water tanks. You have to keep stoking those burners, but that’s easier than breaking ice. With a propane burner or natural gas heater, if the wind blows hard it may blow out the pilot light. It’s difficult to relight in those conditions unless you put a blanket or something else around it to stop the wind so you can get it going again.”

“Some people try to use an insulated tank, but when it gets down to 30 below zero, they’ll be chopping ice,” he says.

With many cows drinking on a water system with a lot of volume, constant flow helps keep water from freezing, but when it’s really cold (at night), cows aren’t drinking, so there may not be enough flow to keep it from freezing.

Running water doesn’t freeze, so some ranchers use a system in which water flows continually rather than using a float. The water must have somewhere to go, however, or it creates ice buildup. The ice needs to be away from the tank or you’ll have treacherous conditions around the water tank.

Spring-fed water is usually ground temperature (50 to 55 degrees) which is usually warmer than river or pond water in cold weather. If there’s enough flow and it can be kept moving, spring water won’t freeze until temperatures get really cold, but there will be an ice flow in the discharge/overflow from the tank.

Some ranchers simply let cattle drink from a stream, river, lake or pond but these freeze over in winter and you must chop ice.

“We have dugouts here in North Dakota that collect runoff water during spring and summer or fill with ground water if there’s a relatively high water table,” Hoppe says. These work fairly well, but you have to chop ice, and sometimes cows walk out on the ice and fall through and drown.

A temporary fence (like a battery-operated hot wire) along the pond or lake can limit the cattle to the edge where drinking holes can be chopped, preventing them from walking onto the frozen pond or lake.

Large rubber tire tanks can be covered and set into the ground, but at 40 below, even the drinking holes freeze over unless they’re covered, he says. A cow may flip the cover open and then it freezes open.

Hoppe says some of the big rubber tire water tanks are covered, but have an open spot where cattle drink. Some are installed with a riser hole in the center, rising eight feet up from the ground beneath. The riser pipe is two or three feet across, to get more ground heat coming up.

“Some folks who use big tire tanks line drinking holes with plastic so wind can’t get under the top. It’s like drinking from a big covered bucket with holes,” he adds. “It has a lid the cows can open up to get to the water. Sometimes those lids freeze down, however, so you need to keep checking them in cold weather.”

The old fountains with balls at the top worked, but you had to set those floating balls at the right level, and in cold weather go out every morning and stomp on those balls to break them loose, Hoppe adds.

“About 35 years ago we had a watering system at the university called the jug,” Hoppe remembers. “Back then the tanks didn’t have much insulation and you had to turn up the heat (and use more electricity) to keep them from freezing. Then they came out with a system called the jug, which had a reservoir of water but the cattle had to suck it out of a small hole in the center. Now there are plastic waters with more insulation.”

Nearly all heating systems fail at some point, so it’s wise to have a backup plan when cattle need water, especially if weather is going to stay severely cold for several days.

To read about a cattle-powered solution to winter water, click on this link.