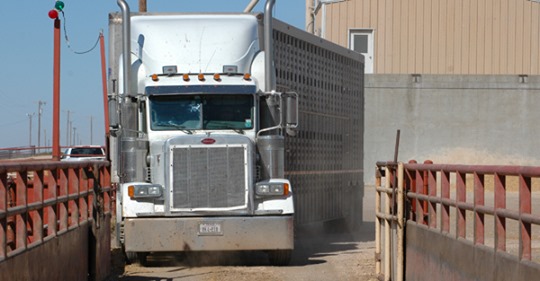 Cattle prices plummeted, then began to regain ground as the market adjusts to new dynamics.

Cattle prices this week continued to claw their way back from the stiff decline borne by the August 9 fire that temporarily shuttered Tyson Foods beef packing plant at Holcomb, Kan.

Arguably, the first solid foothold came with Monday data indicating total federally inspected cattle slaughter was 651,000 head the week after the fire. That was 9,000 head more than the week of the fire.

In other words, at least for that first week after the fire, packers figured out how to compensate for the approximately 30,000-35,000 head per week void in slaughter capacity. Most likely, the hole wasn’t completely filled nor most efficiently, but enough to allay some of the worst fears.

Negotiated cash fed cattle trade was undeveloped through Wednesday of this week, but a small sample of steers (Five Area) brought $109 early on. As well, a jag of Choice 2-4 steers brought an average of $109.27 at the mid-week fat auction in Tama, Iowa; country trade in the region the previous week was at $106.50-$110.00.

The Five Area region consists of Texas-Oklahoma-New Mexico; Kansas; Nebraska; Colorado; and Iowa-Minnesota. This region markets more than 80% of the fed cattle in the country.

Lower fed cattle prices and significantly higher wholesale beef values caused plenty of consternation among cattle producers as divergence between the two grew what are apparently already historically high packer margins. Some went so far as accusing packers of manipulating the situation to their advantage.

At the risk of being labeled a packer apologist, it seems to me that competition for packer customers is too fierce and price discovery too complex, let alone price realization, for any sector to shove markets where they’d like.

Limit-down moves in cattle futures the first couple of trading sessions after the fire, which robbed cattle feeders of leverage, came at the hands of folks with long positions getting out as fast as they could until they knew more about the situation.

On the other end, no beef buyer is going to pay another $20 per cwt if they’ve got ample inventory.

Before and after the fire, markets continued to do what they’re wont to do: allocate supply and ration demand based on the perceived dynamics of both.

“Choice boxed beef prices increased by over $22 per cwt or 10.3% in one week. This illustrates one of the most important functions of markets (one that is commonly taken for granted): markets make sure that we don’t run out of things.

“With less supply available, the market uses higher prices to determine how limited beef supplies will be allocated. It is a common market reaction,” he says.

“When a freeze hits Florida, orange juice prices begin to rise immediately, not because there is an immediate shortage of juice, but to make sure that the current supply continues to be available over time. Markets will never tell a consumer that they cannot have a product, but prices will rise enough to convince some consumers not to consume as much of the product at this time.”

While uncommon, it’s not unique for history and circumstance to dole out unexpected largesse to various industry sectors.

For instance, in the summer of 2003, when BSE barred Canadian beef exports from world trade, before the same happened to U.S. beef exports about six months later, U.S. cattle feeders were suddenly marketing fed cattle for exponentially more money than they dreamed possible when the cattle were placed.

More recently, few cow-calf producers would ever have supposed calves could fetch upwards of $300 per cwt., as happened when widespread, prolonged drought accelerated and extended herd liquidation a few years back.

Of course, the latter was what helped encourage beef packing capacity attrition during the last decade. As capacity aligned more closely to cattle numbers—as over-capacity went away—cattle producers and feeders grew more vulnerable to any bottleneck in the packer sector.

That vulnerability remains—more so until the Holcombe capacity is restored—but could change.

As Peel wrote in his market comments immediately after the Tyson fire, “There are many unknowns for Tyson and the industry going forward, including the possibility that this sets the stage for new investment in beef packing.”

Tyson plans to rebuild the Holcomb facility. At a news conference, Tyson officials explained the area impacted by the fire was relatively small, in terms of square footage, but large in terms of the plant’s electric and hydraulic infrastructure. Officials said rebuilding will likely be a matter of months, rather than weeks.

Looking ahead, Peel provides some context, via a similar situation almost 20 years ago, when the ConAgra beef packing plant at Garden City, Kan., burned and never reopened.

“Subsequent research confirmed initial reactions generally similar to the current situation.” Peel says. “Most of the negative impacts on fed cattle prices subsided in three to six weeks after the event.

“Packing capacity, relative to cattle supplies, is somewhat tighter this time, so the impacts may be slightly larger or longer-lived. Nevertheless, boxed beef and cattle markets will likely adjust relatively quickly in the coming weeks with final adjustments depending on the duration of the plant closure.”

Boots on the ground make a difference

Cattle prices haven’t roared back with the ferocity at which they declined, but the fact that they began to recover so quickly speaks volumes about market efficiency, not to mention lots of legwork behind the scenes.

On the Monday after the fire, the Kansas Livestock Association (KLA) had already worked with CattleFax to inform its members that the Tyson plant accounted for up to approximately 6,000 head per day.

“KLA has been in contact with Tyson and Gov. Laura Kelly’s administration regarding the situation,” the association told members. “This communication will continue as KLA works with both sides to address any obstacles standing in the way of bringing the facility back on-line as quickly as possible. Gov. Kelly has expressed the state’s full support to Tyson President and Chief Executive Officer Noel White.”

Similarly, the Texas Cattle Feeders Association (TCFA) informed its membership: “Beginning Saturday morning (August 10), TCFA staff and leadership reached out to Tyson, Cargill, JBS and National to assess the impacts of the Holcomb plant fire and determine what accommodations would help allow for increased processing capacity at other plants, minimize uncertainties, and help stabilize the markets.

“Following that outreach, TCFA called and met with USDA agency leaders to emphasize the need for regulatory flexibility and ability to shift agency personnel as needed to increase capacity at other plants. Throughout the week, TCFA staff coordinated communications and outreach efforts with NCBA, CattleFax and other cattle feeding state affiliates whose members are directly affected by this incident.”

On Tuesday after the fire, on behalf of the National Cattlemen’s Beef Association (NCBA), Colin Woodall, NCBA senior vice president of government affairs, wrote a letter to Greg Ibach, USDA under secretary for marketing and regulatory programs, requesting, “…that APHIS and FSIS inspectors, along with AMS graders, be provided the flexibility needed to move to other plants and work expanded shift hours, including weekends, in order to help the packing segment of our industry process the cattle headed to harvest…we ask that Packers and Stockyards Division staff remain vigilant against any effort to illegally capitalize on the current market situation.”

In another letter, NCBA asked the U.S. Department of Transportation to declare an emergency suspension of Hours of Service for cattle haulers. The organization also sent a letter to the Commodity Futures Trading Commission, requesting that the agency, “…keep an even closer eye on the cattle markets to ensure that no market participant tries to use the uncertainty to manipulate or illegally take advantage of the situation…”