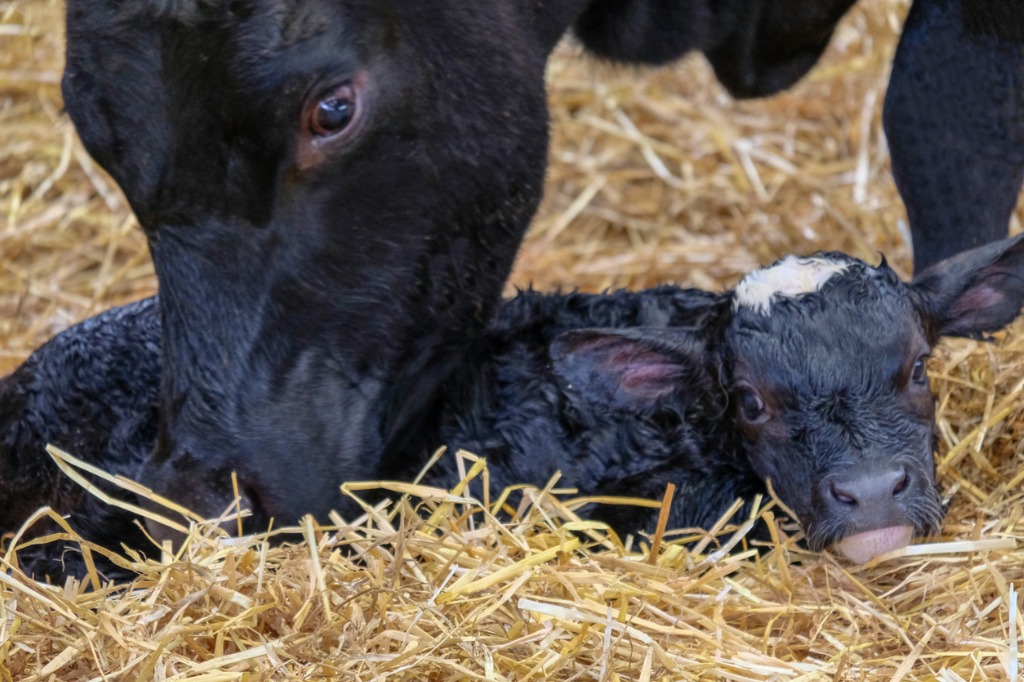 Some calves are injured at birth by improper pulling methods, especially when using a mechanical calf puller.

Dr. Matt Miesner at Kansas State University says he doesn’t see as many calving problems today, compared to several decades ago, because stockmen can reduce problems by selective breeding and use of bulls that sire easy-born calves.

There are still occasional problems, however, such as backward calves, when a person needs a calf puller.

“The main thing is to recognize when there is a problem,” he says. “Heifers take longer to reach stage-two labor than cows. Monitor the calving and look for progress. If I see feet out on a cow or heifer, and come back 30 minutes later and those feet are in the same spot (no progress), assistance might be needed.”

There are also challenging situations where you don’t see feet, but the cow has been acting like she’s in early labor for a long time. The calf may be breech or in some other abnormal position that keeps it from coming into the birth canal far enough to have a foot showing or to stimulate the cow to start straining.

This also happens with a uterine torsion; the calf can’t come through the cervix because there’s a twist in it. “You reach in and can’t get your hand into the uterus. It’s like the cow is not dilated; the twist has blocked off the opening. This must be corrected before the calf can come through,” Miesner says.

“If the cow has been in labor but nothing is happening, check her. A breech calf can be tough to detect because the cow isn’t getting enough stimulation to push.”

If a problem is discovered and you try to reposition the calf, keep track of the time. “I always look at my watch; if I’m not making headway every 15 to 30 minutes, it’s time to reassess and make another plan,” he says. Don’t wait too long to decide whether you can correct a problem or pull a big calf or if you need to call your vet for more help, or a C-section, to have a live calf.

“The sooner we make the right intervention, the better – before the cow is fatigued or the calf is dead,” he says. Part of using a calf puller properly is also knowing when not to use it and to opt for a C-section instead.

If the calf isn’t coming, and you reach in and feel his head jammed against the cow’s pelvis, with no room to force your fingers between his forehead and the pelvis, he’s not going to fit through. “If I get both legs into the birth canal but the calf’s head will not enter, it’s no use trying to pull that calf,” says Miesner.

If you can correct a simple problem, you may not need the calf puller because you can let the cow go ahead and have it or give her some help, but if it’s backward or a little too big for a normal birth, you’ll want a calf puller.

“Most of the time, you don’t need it. I always try to pull a calf by hand first, and if I have someone help (on a fairly hard pull), that’s great. If not, then I need the puller. It can provide the extra strength when needed – and if a person ends up having to pull a couple calves a night, it’s nice to have,” says Miesner.

“Just be careful how you use it because it can apply up to 1,000 pounds of pressure, which can easily hurt the calf. If I was hanging over the edge of a building and someone hung 1,000 pounds on the ends of my arms, it would do some damage. The puller is a great tool, however, if you use it correctly,” he says.

“If things aren’t progressing when using the puller, reach in again and check, in case the head turned back or something is sideways. Even if you got the calf positioned correctly before you started pulling, sometimes something changes,” he explains.

If it’s a big calf in forward position, pull on each leg alternately to bring the shoulders through the pelvis one at a time. This reduces the width of the calf coming through. “Pull alternately on the legs until the elbows come out. This belly crawl helps you get the calf out and reduces the overall pressure applied to the legs,” Miesner says.

Assess the calf’s position before you start to pull. If feet are pointing up rather than down, it may be backward. Feel inside to make sure, in case the calf is sideways or upside down. Make sure you have front legs rather than hind legs and that it’s just one calf and not twins. Also make sure the head is coming (and not turned back) before you hook onto the legs and pull.

When attaching the chains, make a double half-hitch on each leg, with one loop above and the other below the fetlock joint. “This distributes pressure more evenly – less likely to injure the joints or leg bones,” he explains.

When applying pressure, do it slowly (unless it’s a backward calf and you need to get him out quickly – but even then, you should start slowly to give the cow time to stretch because a backward calf is not streamlined). Pull at the correct angle. The calf must come up over the pelvic brim and then down. Pull straight out at first, then on a frontward calf, after the ribcage comes through, pull downward to raise the calf’s hips higher as they come through the pelvis, to come through at its widest area.

When pulling a backward calf, use lots of lubrication and make sure you have enough cable to get the calf clear out. Depending on the type of calf jack, if it’s a long-legged calf, you may need to stop pulling after the hocks emerge and reposition the chains above the hocks, so you won’t run out of winching room before the calf’s head has come out. Once the hips are out, the umbilical cord is pinching off or broken, and he needs to come out swiftly so he can breathe.

LAY THE COW DOWN

Dr. Mark Hilton, professor emeritus at Purdue University and now senior technical consultant with Elanco Animal Health, says that after he gets chains on the calf, he lays the cow down before pulling.

The cow can calve easier if she is in natural calving position, flat on her side. Gravity works against her if she’s standing up because the calf is down in the uterus (resting on the abdominal floor) and must come up and over the pelvic brim.

“I don’t have to put much pressure on the rope to lay her down. I’m not a big person, but I can readily lay a 1,500- to 1,600-pound cow down, even if the farmer’s 120-pound wife is the only person helping. The key is pulling on the chains at the same time you pull on the rope.”

Once the cow is down, he lays her flat on her side before applying the calf puller. It’s better to have the cow lying down before pulling. You can position the puller properly and not have her falling down while you are trying to pull the calf.