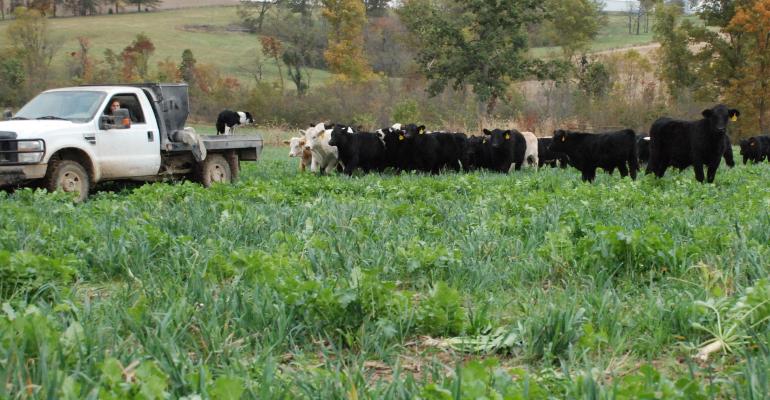 Communication is a key to low-stress handling

Stressors of transportation, processing and handling can significantly impact an animal’s susceptibility to respiratory diseases and response to vaccines.

“We want to make their new home as close as possible to their old home or better. We try to think through what might make a new calf more comfortable,” says Dave Steinbecker, Jr. of Perryville, Mo. “We like to start them on feed similar to what they were eating before to benefit their health overall. We also feel like we’re starting cattle better, which helps with immunity.”

He’s talking about how he and his team receive and handle the stocker calves he receives year-round—Medium #1 and #2, high-risk to low-risk, 350-750 pounds, whatever makes the most economic sense at the time.

“It’s very important that we take good care of the livestock and treat them with respect; they respond to that,” says Steinbecker, who was named the 2017 National Beef Stocker Award winner.

Spend just a little time at his operation and you can see the proof in the proverbial pudding. Calves that arrived and were processed a day earlier are already up to the bunk eating while Steinbecker is still flaking bales.

Steinbecker processes cattle the same day they arrive and keeps cattle in nearby pens for the first few days after arrival. As long as the weather cooperates, calves head to a home pasture a few days later, where they’ll receive a nutrient-dense commodity ration for the next 40 days or so.

Crawl out of a pickup to prowl the pasture, and these calves are more apt to wander up to you than move away.

What you can’t see with the eyeball and only a few minutes are the manifold benefits of deliberate, effective stockmanship associated with their low-stress cattle handling.

For instance, Ron Gill, a leading stockmanship expert and Texas A&M University Extension livestock specialist explains, “The stress associated with handling is one of the key factors in preventing the immune response to vaccines.”

Gill made the comment during a cattle handling training session for feedyard cowboys that was part of a Beef Quality Assurance certification training sponsored by the Texas Cattle Feeders Association (see “Low-stress cattle handling…” below).

Specifically, Gill was advocating deliberate acclimation of newly arrived cattle, whereby cattle handlers interact with the cattle every day for the first few days after arrival.

“We’re looking for 15 to 30 minutes a day, getting to where I can do what I want with the cattle, move them around and get them quieted and settled down,” Gill explained.

When he owned his own preconditioning yard, Gill’s use of acclimation led to significant declines in morbidity and mortality, as well as 0.25 pounds more of average daily gain.

Obviously, you can find all kinds of research and personal examples that quantify significant performance and economic benefits associated with reducing cattle stress.

“Stressors of weaning, transportation, processing and handling can significantly impact an animal’s exposure and susceptibility to respiratory diseases through the various stages of beef cattle production. Decreasing stress during these management times with low-stress cattle handling can help reduce the interaction of these management stresses with psychological stressors, fear and flight,” according to Cattle Handling to Minimize the Incidence of Bovine Respiratory Disease, a factsheet developed by Washington State University Animal Science and Veterinary Medicine Extension. “BRD prevention can be accomplished by minimizing both exposure to pathogens and stressors associated with managing cattle.”

That’s besides the elevated level of care low-stress handling offers cattle. That’s before considering improved safety and reduced stress of those handling the cattle.

For his part, Steinbecker has no other point of comparison. “We’ve always done it this way,” he says. “I grew up doing it this way with my grandfather.”

Attention to cattle care and comfort starts before cattle arrive at Steinbecker’s operation.

Cattle have immediate access to clean water—waterers are bleached and scrubbed every week—and quality grass hay. Cattle go to pens bedded with straw and ground hay or sawdust, depending on the location. They don’t use sawdust in pens near working chutes.

There is no shouting or fast movement around the cattle. Steinbecker and his team use the universal hand signals we all know. Mostly, though, they talk quietly to one another across pens and alleys using smart phones connected to the ear buds they wear.

Those smart phones enable other useful communications, too. When someone treats a calf, for instance, they use Google Sheets to note the specifics; an example of the younger generation adding practical technology to the mix.

“The rest of the team knows immediately. No one is wasting time,” Steinbecker says. “Communication is the biggest thing.”

That goes for both people and cattle.

At its core, Gill explains low-stress handling is about using the basic instincts of cattle to the handler’s advantage (see “Low Stress handling at weaning…”).

For instance, Gill explains that cattle naturally want to see you. Understanding that, plus the points of balance in cattle, their flight zone, the fact that they’re prey animals and other principles, enables handlers to subtly apply pressure when cattle have a place to go and direct them there.

Some folks, like Steinbecker, do this naturally, the result of cow sense learned from parents and grandparents. For others, learning and using the principles represents a new education.

When calves head to their new home pastures, Steinbecker and his team—typically his son, Cole, or Chelsea Kirn—use a dog to help push cattle to the bunk for the first few days. Keep in mind the dogs they use are not the tail-biting, yapping types that can steal defeat from the jaws of victory and make the preacher cuss. These are top-shelf Border Collies started when Steinbecker gets them.

“They’ve got to have a stop button on them; you’ve got to be able to shut them down,” Steinbecker explains. “You can fix any problem if you can stop them. You have to have confidence in your dog.”

He understands using dogs aren’t for everyone. In his case, though, he explains, “The dogs get the respect of the cattle and can hold them at the bunk. The cattle start to associate the dog with feed being in the bunk. By about day five, we don’t need a dog on them.”

Even after the dogs are no longer needed, whoever is delivering feed to the bunks takes time to get out and interact with the cattle, see and monitor the cattle.

Steinbecker adds, “There’s nothing magic in a bag. If you want to get new calves to the bunk, you’ve got to give them something they really want to eat. And, you’ve got to monitor the bunks and know what number you’re after for dry matter intake.”

“Just getting them to move and do what you want them to do, that’s stockmanship. But when I take stockmanship to the next level and use that to actually manage the psychology and well-being of an animal, that’s low-stress handling,” Gill explains.

“Animals know if you care. It’s just trying to make things for the cattle as friendly as possible,” Steinbecker says.

The Land Loan Specialists Whether you’re a first-time buyer or looking to expand your operation, Hall and Hall will ensure your needs are met to the highest standard. Get in touch to discuss how we can help achieve your financing needs. CONTACT US TODAY!  smoran@hallandhall.com   tina@hallandhall.com   Learn about innovative…