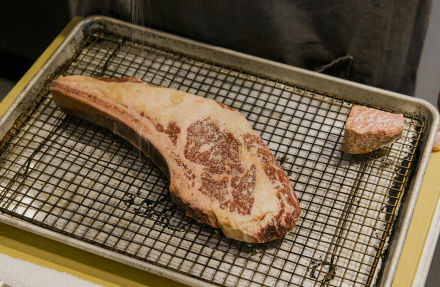 Steakhouses looking for the next big thing are hoping to lure diners with dishes made from older cows; ‘a little bit of a tougher bite’

Rod Bolls, 44, is a regular at Corrida, a steakhouse in Boulder, Colo. But he wasn’t sure he wanted to try one of their newer offerings. Dubbed “vaca vieja”—Spanish for “old cow”—it’s a ribeye steak the menu described as being “8 years at harvest.” That’s about four times older than normal.

“I had some reservations eating an 8-year-old cow,” says Mr. Bolls, who owns a storage-container company. “When you think older cow, you think beef jerky.” But the chef persuaded him to try it. “He said, ‘Listen, it’s like a fine wine.’”

Steakhouses looking for the next big thing are hoping to lure diners with a new hook: old beef. Traditionally, U.S. restaurants have served meat from cattle that are no older than two years; older animals can be tougher and more susceptible to disease. But the meat tends to have a richer flavor. Taking a cue from restaurants in Spain, especially the Basque region, where “vaca vieja” is a tradition, more U.S. restaurants are putting old beef on the menu.

For high-end steakhouses, an older beef offering can help cultivate a trendy image and bring in more revenue, says Chicago restaurant consultant Aaron Allen. “They are constantly trying to find ways to make steak a differentiated experience,” he adds.

Bazaar Meat in Las Vegas was one of the first U.S. restaurants to offer older cows when it opened in 2014. Most diners still order the younger steak, says executive chef Alex Pitts, but interest in the older offerings has grown, now comprising about 15% of steak orders, says Mr. Pitts.

Getting the menu description right can be tricky. “We’ve never come up with the perfect verbiage,” Mr. Pitts says. “Calling it an ‘old’ animal has some weird connotations.” The menu uses the “vaca vieja” term, sometimes with additional phrasing. An older-beef ribeye tasting is: “In the European tradition, a more mature animal with more pronounced flavor, hand-selected eight-year-old working cows.”

At Corrida in Boulder, chef and co-owner Amos Watts started selling older beef last year. The 8- to 12-year-old angus tomahawk ribeye sells for $110 a pound. To make it more tender, the steak is dry aged, a process which helps break down the meat.

He often brings raw meat to a table to highlight how the fat in an older cow is visible “in little flecks” versus the “lightning bolts” in younger steak, which can create more tenderness when properly prepared, he says. “The marbling is as good as our Wagyu,” says Mr. Watts. “It’s definitely our most special beef.” Servers explain that the older cut is analogous to a full-bodied red wine. Diner Mr. Bolls is a convert.

At RPM Steak in Chicago, executive chef Doug Psaltis started offering older cows as a special two years ago, inspired by chefs in Spain. Now “vintage or antique” beef appears every other week, including a $58 ribeye from a 6-year-old dairy cow, he says. Recent specials have included a “tartare of vintage beef” along with a “coal-roasted Vaca Vieja Chuleton.” The older meat is often prepared over charcoal rather than in a broiler because “vintage beef is unique in its taste and texture,” he adds.

Servers tell customers the older meat has more connective tissue, which means it’s more muscular and harder to bite. “Younger beef could be like chewing bubblegum, mature beef tends to be a little bit of a tougher bite,” says Mr. Psaltis. But some diners like the richer flavor. “I don’t even have to add truffle butter,” says Sean Mayman, 29, a Chicago-based IT worker.

Other restaurants are sticking to younger meat. Michael Lomonaco, chef partner at New York’s Porter House Bar and Grill, says he doesn’t put older beef on the menu because it’s hard to assure the quality of older animals. “You need to be really sure of the source of supply,” he says. He hasn’t heard any customers asking for an older cow. “We have had no requests whatsoever,” he adds.

Because older cattle is at higher risk for disease, U.S. government regulations require meat processors to remove the spine, brain and other tissues when slaughtering cattle older than 30 months. That can make it difficult to find plants willing to process older cows, says Jordan Beeman, who runs HeartBrand Beef, a ranch in Flatonia, Texas.

Some chefs are now paying prime-grade beef prices for old cows that were once used solely for ground beef or animal food and sold at a discount, says Austin Simmons, chef at Tris in the Woodlands, Texas, who buys Mr. Beeman’s mature beef. The older animals offer “the most concentrated beef flavor that I’ve ever had in my life,” says Mr. Simmons.

To introduce diners to the older beef, Mr. Simmons offers side-by-side tastings of 2- and 10-year-old beef. “You can see the difference,” he says. The older beef has more red in it and appears slightly darker.

Rebecca Phelps, 32, says she was initially skeptical, worried that an older animal might be more vulnerable to illness. But talking to the chef and seeing the 10-year-old cow on display changed her mind. “It’s kind of like the idea of an open kitchen—it gave me the feeling that they don’t have anything to hide,” she says. She was pleasantly surprised when she ate it. “It has a deeper, more mature flavor, almost like a better glass of wine,” she says. “It’s like comparing a Pinot to a rich Cab.”