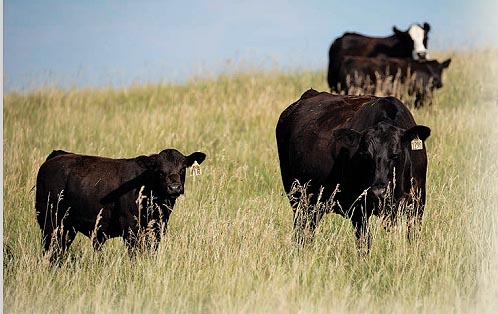 Management for a short postpartum interval can improve cow stayability.

In a perfect world, first-calf heifers would calve in the first 21 days of the calving season, breed back in the first 21 days of the breeding season, and continue to have a calf at about the same time each year of her productive life. The world is definitely not perfect, and some cows will not maintain a yearly calving interval and end up leaving the herd due to the inability to conceive in a timely manner. What has to happen after calving for a cow to be ready to re-breed?

Uterine involution is the regression of the uterus in both structure and function to a status that is capable of carrying another pregnancy. This entails the uterus returning to a nonpregnant size, shape, and position, shedding all fetal membranes, and the repair of uterine tissues. This process is completed in approximately 20-40 days post-calving if no complications arise.

The first ovulation postpartum often occurs without visual signs of the cow being in heat and is often followed by abnormal function of the corpus luteum (CL). Normal CL lifespan takes up 14–18 days of the typical 21-day estrous cycle of a beef cow. The short estrous cycles experienced by cows overcoming postpartum anestrus are characterized by a CL lifespan of 10 days or less. This is thought to be due to high levels of prostaglandin production and metabolism by the uterus during uterine involution. Prostaglandin is responsible for regression and death of the CL in a normal estrous cycle, but at the elevated levels described, that regression and death of the CL is premature. If fertilization of the egg from this ovulation were to occur, maternal recognition of pregnancy would fail as CL regression would take place too soon, and the embryo would be lost.

A nursing calf can be a factor in the length of time a cow takes to return to cyclicity. One might assume that the energy demand of lactation is the major issue at play in this case, but it is actually the suckling effect and presence of a calf. Suckling triggers a complex system of brain and hormone responses that result in lack of ovulation. Frequency of suckling has shown to have a threshold influence on postpartum fertility. Suckling sessions of two or less per day promote a return to cyclicity while sessions of greater than two per day tend to cause postpartum anestrus. It has been suggested that the maternal bond between the dam and calf plays an important role in this phenomenon as well. This may be due to the cow seeing, smelling, or hearing her calf or all of the above!

Plane of nutrition is an important part of cattle management throughout the production cycle. Pre-calving nutrition is probably more important than post-calving nutrition in impacting postpartum interval length. Cows with inadequate energy reserves typically have several follicular waves before successful ovulation. Without ovulation, no CL forms and estrous cycles are not initiated. Due to the dramatic increases in nutrient requirements during late gestation and early lactation, intervention to improve cow condition during times of the year when nutrient requirements are lowest (post-weaning, for example) will result in the most efficient use of nutrients by the cow at a lower cost.

Many different factors interact to impact the postpartum anestrous period in beef cows. This post-calving period of temporary infertility can’t be avoided, but through an understanding of the systems at play, it can be managed to ensure reproductive success during the breeding season.