Towards a better understanding of energy nutrition 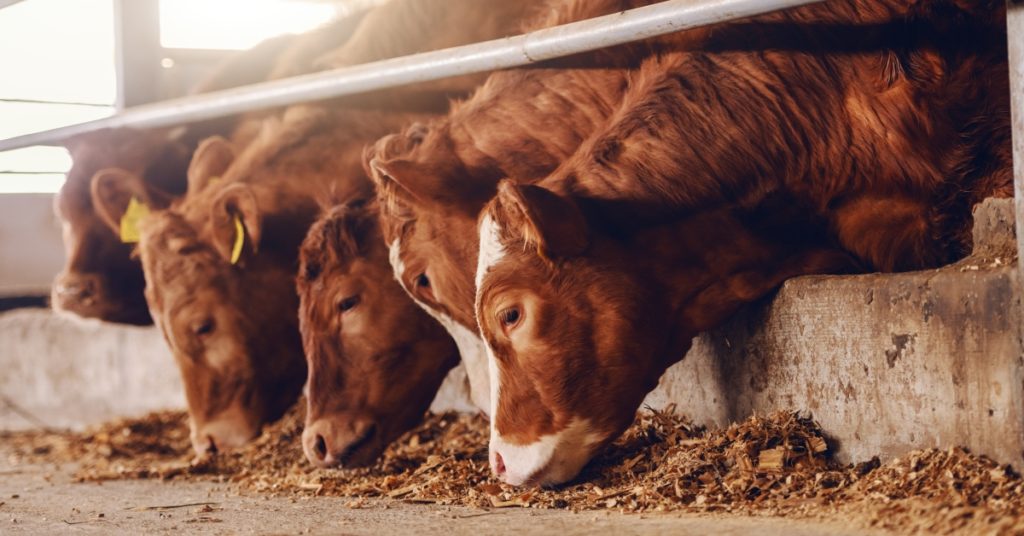 Those engaged in the nutrition consulting game take pride in pinpointing causes of lost performance. Minute dietary inputs get tweaked up or down to find the perfect balance and trigger a hidden internal switch. “Poor conception in the young cows? They are surely deficient in Vitamin X” (…Y or Z, take your pick). “Your calves weaned 50 pounds lighter this year? Likely a trace mineral ratio is out of whack.” While every adjustment promises incremental improvement, significant shifts in performance — either up or down — most often hinge on fueling the system. An animal’s energy status weighs most heavily on the nutrition priority scale and is sometimes overlooked by well-intentioned experts not seeing the proverbial haystack for all those micronutrient needles.

Among the various livestock classifications, beef cattle are not known as the most efficient on the farm. A pen of feedlot steers closing out with an 8:1 feed to gain ratio begs the question, “Where did all the energy go?” Gross energy, or the total amount of energy stored in feed, gets whittled down in a stepped regression to net energy, reminiscent of delivering a 1,300-pound steer to the locker and ending up with 500 pounds of meat. Net energy is the remaining fraction available for animal use and often constitutes the rate-limiting component driving meat and milk production (Figure 1).

In the laboratory, gross energy is measured using calories and determined by burning a small feed sample and noting the heat produced. A calorie unit is too small to represent cattle energy needs, so the megacalorie (Mcal), or one million calories, is used. Since calories measure energy directly, there is potential to establish feed energy content accurately. However, the caloric accounting system has some major shortcomings. When sugar, starch or fiber are burned, they all generate similar amounts of heat without any indication of feed quality. Additionally, the percentage of energy available for animal use remains unknown. While caloric content serves as a basic energy measure, it falls short of accurately assessing a feed’s suitability for meeting animal energy needs.

Total digestible nutrient (TDN), as an indicator of feed energy, lends itself to quick and simple percentage/weight-based calculations. However, it fails to accurately account for the fate of individual energy fractions. Of the energy types depicted in Figure 1, TDN most closely matches digestible energy, which assumes all feed energy not passed in feces is used equally for animal needs. Thus, TDN does not directly account for differences in energy excreted in urine, converted to methane or lost as heat. Given the long duration required for ruminal fiber degradation, gas production and heat of fermentation is greater for roughage than grain. This hidden energy drain can result in less forage energy being available to the animal than what is estimated when using only digestibility as a measure.

Counting calories or measuring digestibility can indicate feed energy content, but neither method tells the entire story. An investment of energy is only as valuable as the realized return. Therefore, the true energy of feed can only be determined through observing the eventual response and outcome; that is, animal production.

University of California, Davis researchers were the first to propose a novel approach to modeling energy requirements for beef cattle (Lofgreen, 1963; Lofgreen and Garrett, 1968). Similar to defining the losses when moving from gross energy to net energy, the new system further detailed the efficiency of net energy use. Net energy first goes to support basic animal functions, or maintenance, before it can contribute to gain. Additionally, net energy is used more efficiently for maintenance than for production. A fitting analogy is when a vehicle is coasting down the highway on cruise control, it uses minimal fuel to maintain its speed as opposed to when it is climbing a hill. Likewise, more energy is required for animal production once a state of maintenance is surpassed. Just like the vehicle fighting gravity, the animal requires extra energy to drive production and pulls harder on the fuel supply.

A fasting animal is similar to an idling vehicle; the heat it produces equals the energy burned to keep its internal “engine” running. In the absence of feed intake, the fasting animal breaks down tissue and internal reserves to maintain the essential functions of life. Thus, fasting heat production indicates the caloric needs for maintenance, or net energy for maintenance (NEm). For the animal to maintain its weight without tissue loss, and continue to fuel internal organs, enough Mcals of NEm must be consumed to equal the heat produced.

Body weight is the only input needed to calculate NEm requirement, and the same equation applies to any size or age of the animal. However, the actual amount of energy needed for maintenance can be increased by many variables. Items such as activity, stress, mud and cold temperature elevate the animal’s maintenance requirement. When the bar for maintenance energy requirement raises, it draws on the energy surplus that would typically go to gain. This shift in resource allocation can be observed in calves losing weight (or gain) in cold weather, assuming consistent feed intake is maintained through the weather event. Energy will always go to meeting maintenance energy needs first, with production being secondary.

Once enough feed is consumed to reach the maintenance threshold, every subsequent mouthful will contribute to gain. For this reason, the intake of finishing cattle should not be limited. Each additional calorie above maintenance is used at the same efficiency and stacked incrementally until fill or satiety factors cap intake. In contrast to NEm, net energy for gain (NEg) is used more efficiently in steers than heifers. While this does not affect energy values assigned to feeds, different gain equations were developed based on gender. Additionally, NEg is not used to represent the energy requirements of mature cattle. In beef cows, the energy needed for milk production is assessed using NEm, as it is converted much more efficiently than the energy used for weight gain.

The capability of a diet to meet requirements for animal maintenance and desired gain is the combined result of intake and net energy content. All feeds have established NEm and NEg values. Net energy density of a mixed ration is the weighted average of its individual ingredients. Since net energy is used more efficiently for maintenance than gain, feed NEm amounts are always higher than NEg. Grains are more digestible than higher-fiber forages and, therefore, possess higher values for both NEm and NEg. Figure 2 shows how NEm and NEg are coupled to model the energy use of a 1,000-pound finishing steer, with and without environmental stress.

In ideal conditions (example A), the steer must consume 8 pounds of dry matter (DM) to maintain body weight and an additional 16 pounds to reach 3.5 pounds daily gain. With weather stress, unacclimated cattle can experience a substantial increase in maintenance requirement, essentially draining energy away from gain. Adding insult to injury, these cold, wet conditions often force cattle to stand huddled in the back of the pen, reducing intake in response to the stress. Example B illustrates the performance loss associated with increasing the maintenance requirement by a third and decreasing DM intake by two pounds. Daily gain drops from 3.5 to 2.6 pounds, yielding a 23% loss in feed conversion. These examples illustrate how environmental stress can mean an additional month of feeding to reach market weight. Time on feed is the difference between profit or loss in a finishing pen.

Crop production offers a final analogy when considering the hierarchy of cattle nutritional needs. The concept of the first limiting nutrient applies to both plants and animals. In simple terms, the nutrient in shortest supply will be the first to limit growth. Crops require water, fertilizer (nutrients) and sunlight (energy) in sufficient and balanced amounts. Like a three-legged stool, restrict energy and the system will fail. Cranking open the irrigation or anhydrous valve will not compensate for an extended solar eclipse. In the darkness, energy deficiency will inhibit production regardless of other inputs. Similarly, cattle will not respond to a measure of a single micronutrient when they are in a negative energy balance. Providing adequate energy for production goals must be addressed first and foremost to allow those smaller inputs to yield benefits.