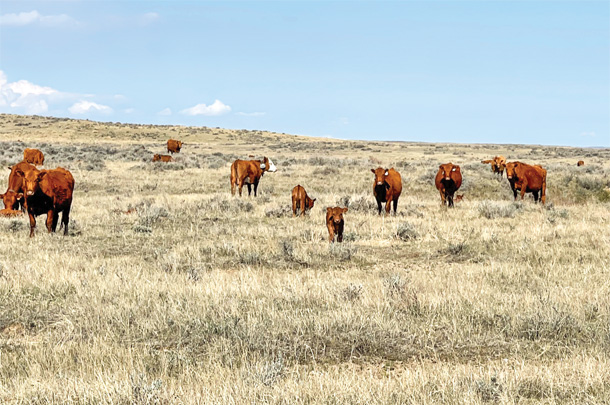 The concept of virtual fences to contain cattle has intrigued beef producers for several years.

Now, Vence is collaborating with ranchers to test the reliability of this innovative technology and to detect glitches in the system. Learn how two producers are using this dynamic tool.

Nick Jorgensen, CEO of Jorgensen Land & Cattle, raises registered Black Angus cattle near Ideal, South Dakota, with his brothers. Recognizing the product’s potential, the Jorgensens have used Vence technology for two years with bred heifers. They wanted to move livestock to grass or crop stubble cattle usually did not graze. If animals could graze farmland in a rotation system, their cash flow on cover crops and full-season forages would improve.

The virtual fence system includes animals wearing collars with an attached sending unit. Vence engineers designed the collars to be choke-free, and the sending units have safeguards to avoid excessive shocks. Ranchers must train cattle to recognize virtual fences by moving animals to a smaller fenced area. Then the producer creates a virtual fence along the physical enclosure with a laptop, tablet or computer program that uses satellite positioning technology. As animals walk toward the virtual fence, they hear an audio tone warning. When they get too close, they cross the shock boundary. Their only option is to walk in the opposite direction.

“When trained to hear the beep, they quickly learn to turn around,” Jorgensen explains. “I’ve trained two sets of heifers. Both times, 85 to 90 percent responded to the sound. Only 10 to 15 percent received a shock. The other 85 percent learned from watching the other cattle. Training was less stressful for them than expected. This is a learning process for Vence and us. Heifers or cows are aware of the collar because they rub on trees or each other. They do it out of curiosity as much as annoyance. It makes it more difficult to keep a collar on an animal.”

Last year, the Jorgensens used the technology to graze heifers on wheat forage. Although the Vence virtual fence system is in the testing phase, the family feels the fully developed product will save time and money.

Virtual fences allowed their heifers to graze on 700 acres which had been ungrazed for 15 to 20 years without building infrastructure. “Our business owns a hunting lodge, and the property we were grazing is one of our primary pheasant hunting spots,” Jorgensen explains. “[In the past] we opted not to fence around any of the strips because the fencing labor was too expensive and the cattle couldn’t graze that area. We used the system to create virtual fences around all those strips while the heifers grazed everywhere else.”

While grazing around these strips, the cattle surprised Jorgensen and the Vence engineers. They discovered the collars’ “cheat code.” Able to endure shocks, which shut off after 90 seconds to two minutes, several animals entered the virtually fenced area to graze unnoticed. “We figured out what was going on,” Jorgensen admits. “Technicians changed the collar programming to deter cattle from entering the virtual fenced areas. Vence has been good to work with us to improve the system. We’ve been a part of research and development on new product features and designs. The animals respected boundaries once we trained them correctly and had the collar reformatted.”

Other benefits of the virtual fence include the rancher’s ability to see each animal’s location at any time with the computer program. For instance, heifers were grazing on 1,200 acres, with access to 400 acres. However, the pasture team could not see a group of cattle grazing behind a ridge. Jorgensen confirmed their location via computer and notified the team.

“Don’t forget this is technology,” Jorgensen concludes. “It isn’t wire, posts and staples. It’s a new dynamic – fencing cattle through your computer. It’s a different management style. This is brand-new, cutting-edge technology; it isn’t perfect. It becomes perfect by being used by ranchers [and the company] taking feedback to improve the product. The collar and virtual fences have a lot of potential.”

Leo Barthelmess, his brother and their wives raise Red Angus cattle on the Barthelmess Ranch near Malta, Montana. Because they apply Savory Holistic Resource Management strategies to the ranching operation, virtual fences have helped them increase stock density and establish regenerative grazing practices to benefit the ranch.

“We have large pastures that vary from 800 acres to 4,000 acres,” Barthelmess explains. “Using the Vence product to subdivide those pastures, we increase stock density around water sources. We usually have 50 pits, reservoirs and natural ponds to water livestock. We can move cattle onto another water source and keep them from overgrazing. We’re subdividing, increasing stock density and also enabling the grass to rest longer and recover. In some situations, the grass rests 60 days, in others 360 days. Those are considerations I need to factor into our grazing plans.”

The virtual fencing system has allowed Barthelmess to establish intensive grazing without hours of labor, erecting temporary fences on his ranch and leased Bureau of Land Management (BLM) land. His goal is for animals to graze year-round. Some of the remote corners of the pastures are a long distance from water. However, cattle can graze nutritious winter grass when snow is on the ground. “We utilize snow as a water source to harvest inaccessible or unharvested forage in the winter we can’t access in the heat of summer,” Barthelmess explains.

Barthelmess reports he sees 90% to 95% compliance from the cattle when the batteries are fresh, lasting about six months. Every six months, he replaces the battery when animals are in the chute for pregnancy checks, pre-calving checks and other health protocols. “Occasionally, I forget where the invisible boundaries are; I’ll move cattle across the pasture and accidentally bump them into the virtual fenceline,” he shares. “That’s as far as they’ll go. I either didn’t have the engineer drop the Vence, or there was a software glitch and it didn’t go down. We’ve done that a couple of times.”

His grazing plan is simple. Barthelmess builds a Vence barrier around a water source. By adding acres to extend the square in one direction, cattle can graze new areas. During the spring of 2021, he grazed 450 cows on 250 acres for five days. Then he moved the virtual fence to provide them with an additional 90 acres for two days. He continued this approach until he finished grazing that pasture. When Barthelmess moved the Vence line, the cattle simply walked forward; they did not remember where the virtual fence had been.

“Virtual fences will be a valuable tool on many kinds of ranches,” Barthelmess says. “If people want to increase stock density and work cost-effectively at regenerative grazing practices, it’s a tool many ranchers can use. If producers have a small number of cows in a large pasture, portions of the pasture aren’t grazed or are overgrazed. You can fix all that now. Ranchers are responsible for actively managing grazing and preparing grazing plans that are more sophisticated, trying to create long rest periods for the grass. You’ve got to manage your access to water.”

The concept of virtual fences to contain cattle is being explored by several companies, including No Fence, Halter, Agersens and Gallagher.

PHOTO 1: Each animal freely grazes until it hears the audible tone, warning that it is approaching the virtual fence.

PHOTO 2: This mama cow wears a collar and sending unit, which warns her with an audible tone if she grazes too close to a virtual fence.

PHOTO 3: This herd of Red Angus cattle are resting by a water source before heading out to graze. Their collars let them know where the virtual fence is.

PHOTO 4: Leo Barthelmess’ grandson, Beau Merriman, stands next to a repeater station on the Barthelmess Ranch. This gadget helps the computer, satellite and collar sending units communicate with each other, so the rancher knows where each animal is.

Gilda V. Bryant is a freelancer based in Amarillo, Texas.