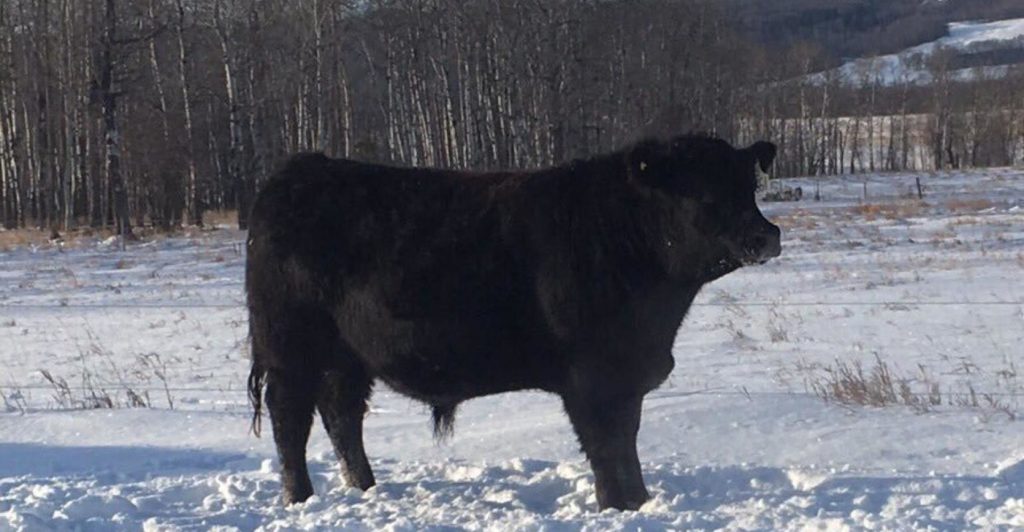 Bulls need as much care and attention through winter as your cow herd to make sure they stay healthy and will be ready for the next breeding season.

“Don’t forget to vaccinate them,” says John Kastelic, DVM, PhD, professor of cattle reproductive health, University of Calgary. Deworming may also be helpful, depending on the situation.

“If bulls are confined, feed them in a bunk rather than on the ground, to break the fecal-oral transmission of disease. If bulls are on pasture and fed hay or pellets, feed on clean ground,” he says. They need adequate diet during cold weather to maintain body temperature and not lose weight. They need a chance to regain body condition if they’ve lost weight.

Make sure feed is free of mold or toxic material. “Sometimes we have issues with ergot on cereal grains. This can cause vasoconstriction and diminished circulation to the extremities. They can lose ear tips and suffer from gangrene. Certain molds can be harmful and some have estrogen-like properties which interfere with semen quality.”

Clean, unfrozen water is important, with minimal fecal contamination. “It’s best to have some kind of point water source like a stock trough, rather than drinking from a dugout or stream,” he says. To keep them out of a water source, it can be fenced off and the water piped to a trough, or delivered via nose-pump or some other system to keep it clean and prevent freezing.

Bulls should always have access to a salt/mineral mix, since mineral deficiencies can lead to health issues. Check with your herd health veterinarian or nutritionist to know what type of mineral supplement might be needed to balance the diet and make up for deficiencies in the feed. You may need to test your feeds to know what minerals will be needed.

Lice can be an issue in winter, especially if bulls were not deloused, or if delousing was done too early in the fall. In either case, they may start rubbing out their hair before spring. In this situation, they should be treated for lice (or treated again). You don’t want them rubbing their hair off in cold weather and losing that insulating hair coat.

“To prevent [scrotal] frostbite, bulls need adequate dietary energy, and a good windbreak like trees, a coulee, or a manmade windbreak with about 20% porosity (which works better than a solid barrier that the wind goes up and over). Bedding is also important, so bulls are not lying on frozen ground or in a snowdrift, or sleeping in a wet, filthy environment.” Bulls that are covered in frozen mud and manure lose much of the insulating quality of their hair coat.

“A little frostbite won’t be detrimental, especially if it’s just on the bottom part of the scrotum. This will generally heal. The bull might have temporary reduction in sperm quality, but unless you are fall calving and breeding cows during winter, it usually won’t be a problem,” he says.

“If frostbite covers a larger area, like up the back side of the scrotum or halfway up the scrotum, this may create adhesions and the bull can’t raise and lower his testicles. If you are checking a bull and push the testes upward and the scrotum puckers up, this indicates there are some adhesions–with a relatively poor prognosis for recovery.”

Travis Olson, Ole Farms, Athabasca, Alberta, has had a lot of experience with bulls. This ranch has 1,100 registered Angus and 300 commercial cows.

“When taking care of bulls in general, especially older bulls, I give them lots of room. I prefer to keep and feed them in large pastures away from the cows and make sure they have good bedding in several areas. I don’t want them bedding in just one location because some bulls don’t get along.  If I have 60 mature bulls out in one pasture I make sure they have bedding in at least two or three locations,” he says.

Otherwise some of them take a beating from other bulls. “The older bull might be dominant during the breeding season, but maybe he doesn’t have the energy or desire in the winter to put up with an aggressive young three-year-old that’s trying to come up through the pecking order. The older bull might be able to beat the younger bull, but he just doesn’t want to get into a scrap.”

Rather than constantly fighting to settle the pecking order over something trivial, an older bull might go off by himself in a corner of the pasture with no bedding. “You might notice issues with scrotal frostbite on these bulls because they don’t have the advantage of bedding and a windbreak.  So make sure you have bedding and a good windbreak in at least two locations so that if an older bull is being pestered and doesn’t want anything to do with that situation, he has somewhere else to go. This is why I give them lots of room,” says Olson.

His yearling and two-year-old bulls are in a separate paddock and not with the mature bulls. As long as all the bulls have adequate feed for maintenance–and extra nutrition for the younger bulls that need to regain lost weight and keep growing—winter bull management is fairly simple.